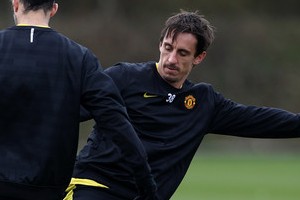 Neville’s current deal was set to expire at the end of the current campaign, but he will now stay at Old Trafford at least until the end of next season.

The 35-year-old joins fellow United stalwarts Paul Scholes and Ryan Giggs in prolonging their playing days at the club where they began their careers.