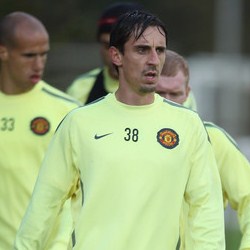 The recently retired right back has warned his old teammates that there’s still work to do if they’re to win the Premier League this season.

“I think it probably is Chelsea and Arsenal [who are the threats],” Neville told manutd.com.

“Arsenal had a couple of bad results when they could’ve put some pressure on us, particularly in the week we lost to Chelsea and Liverpool. But it is there for us and we’ve got so close. It is the run-in.

“I think Saturday’s a big one to be honest with you, coming back from the internationals and playing away to West Ham with a lunchtime kick-off. That’s got a danger to it. That’s good in some ways though because the lads have been there before. It’s really, really important, they’ll know it’s a danger game. We’ve seen those times and how difficult those games are. I think we’ll be ready for it.”