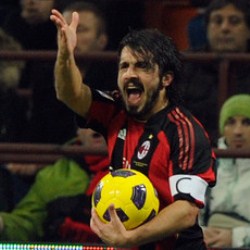 Gennaro Gattuso has openly admitted that he was hoping Inter Milan would lose to Bayern Munich this week.

The reigning European and Italian champions staged an amazing comeback to beat their Champions League opponents in Germany.

Gattuso told Radio Montecarlo : “Well, to be honest, I did cheer against them,”.

“On 2-1 I thought Inter were going to concede another three or four. Yet you could tell the Bayern defence left something to be desired.

“The fact Inter went through proves that Serie A is not the way everyone likes to describe it.”

Kaka Thrilled To Be Back With AC Milan

Fredy Guarin To Turn Down Man Utd For Chelsea Switch