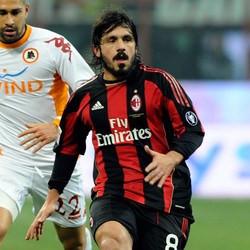 Gennaro Gattuso has declared that he will not be in attendance for the second leg of the Champions League tie with Tottenham Hotspur.

The combative midfielder got into plenty of trouble with his actions during and after the match at the San Siro last week, grabbing Spurs assistant Joe Jordan by the throat and headbutting him.

The former Italian international received a four-match ban from Uefa meaning he is ineligible for next week’s return bout at White Hart Lane.

However the former Rangers midfielder said that he will certainly not be attending the match after being told it would not be a good idea.

“I would like to go to White Hart Lane for the second leg but I have been advised not to,” he told Italian radio.

“I have been told there will be 47,000 people there just waiting to give me a slap, so I will stay in Milan.

“It was lucky Zlatan Ibrahimovic was not at my side when the confrontation with Jordan happened. If he had been, the fight would still be going on.

“When I went towards Jordan at the end of the game, he took off his glasses like he was ready for a challenge. He was screaming the ‘f’ word at me repeatedly.”