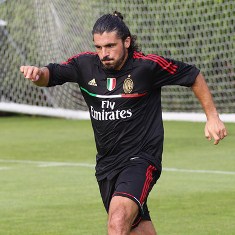 Reports are out claiming that AC Milan veteran midfielder Gennaro Gattuso will not consider hanging up the boots.

The 2006 World Cup winner, now age 33, has not played since the opening League game of the season after it was revealed that he’s struggling with a paralysis of the seventh cranial nerve.

“There was a time when I thought the worst, but I want to get back to playing football,” he said during a Press conference on Monday.

“It’ll take more than this to beat me. The important thing is to not give up. I can train, but I can’t play because I have double vision.

“After 50 days out, I’ll need to wait another four months before an operation can take place to resolve everything.

“About 25 days ago there was the risk that I could be forced to retire. The first thing that Vice-President Adriano Galliani said to me was to not worry because the club could use me in other ways.”