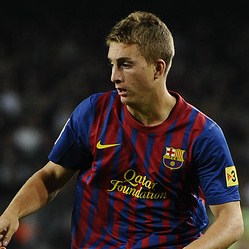 According to El Mundo Deportivo, the exciting 18-year-old prospect is being tracked by Manchester United, Chelsea, Arsenal and Real Madrid.

The Spanish U19 attacker is regarded among the best prospects to come through the La Masia system since Lionel Messi.