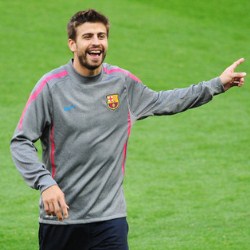 Gerard Pique has taken aim at Barcelona’s critics during their Champions League celebrations at the Nou Camp yesterday.

Barcelona players have bristled over claims of doping, favouritism from match officials and play-acting and the Spanish international defender addressed all the issues yesterday in front of his adoring public.

“We do not take drugs, nor do we dive, or buy decisions from the referees,” said Pique.

Words which were greeted with huge cheers from the Barca fans.