It has been reported that Barcelona defender Gerard Pique denies he was axed from Spain’s squad. 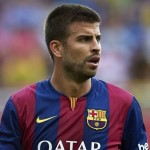 La Rojo coach Vicente del Bosque left out the 27 year old from his first squad since their summer flop in Brazil.

But Pique, who feature in victory at Villarreal, insists he asked not to be considered.

“I want to thank Del Bosque for the gesture he has made, because I asked him to.

“I asked him not to select me for the games because I still had some discomfort. I want to thank him for his decision.”