Reports have emerged claiming that Barcelona defender Gerard Pique will be sorry if Pedro leaves for Manchester United or Arsenal. 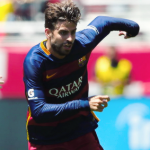 Pique made a similar move as a teenager before his celebrated return.

“Pedro’s situation is difficult because he’s competing with the best three in the world,” he said.

“But if he’d leave that would weaken us.”