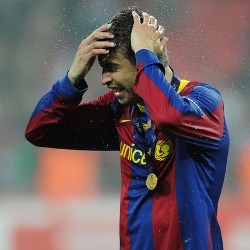 It has been revealed that Barcelona players will celebrate their Champions League victory at a Shakira concert tonight.

Gerard Pique tweeted after their triumph over Manchester United that they will be attending his girlfriend’s show.

The Spanish defender tweeted : “Champions!! Champions!! thank you so much!!”.

“Tomorrow at Barcelona and then the players will go to @shakira concert in the Olympic Stadium!!”