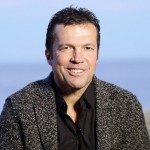 Reports are out claiming that former Inter Milan star Lothar Matthaus has slammed his former club.

It is said that the 53 year old is unimpressed by Arsenal attacker Lukas Podolski’s decision to move to the Nerazzurri.

He said: “Inter is no longer the team of the past. Italy lost charm. Too many scandals, little modern infrastructure.

“In the 90s Inter and AC Milan have written the history of football, had players like Gullit, Van Basten, Hansi Müller and Karl-Heinz Rummenigge.

“Today the top players play in Spain, Germany and England, not in Italy.”