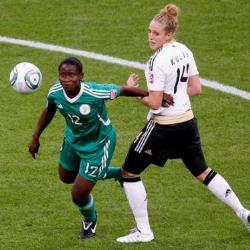 Germany edged Nigeria 1-0 in a hard-fought Women’s World Cup game at the Commerzbank-Arena in Frankfurt.

Simone Laudehr netted the only goal of the game after the break as the host nation booked a place in the last eight of the competition.

Neither side was able to dominate the opening period, a half in which few chances were created. The Germans were gifted a chance within the first five minutes as a mix-up between goalkeeper and defender allowed Laudehr to sneak in and shoot. Precious Dede in the Nigeria net had to be on her toes to get down low and save.