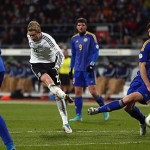 Germany, again playing without a recognised striker, hit three goals in eight minutes on the way to a 4-1 defeat of Kazakhstan that kept them in control of World Cup Group C.

The Borussia Dortmund trio of Marco Reus, Mario Götze and Ilkay Gündogan scored in the first half and Reus added a fourth goal in stoppage time at the end as the group leaders won for the fifth time in six qualifiers.

The Germans, who hit the woodwork six times in a one-sided encounter that at times looked more like a friendly, played without a recognised striker just as they did in Friday’s 3-0 victory in Kazakhstan.

The home team produced some lightning-quick passing to open up the Kazakh defence time and again. Despite being without Bastian Schweinsteiger, Miroslav Klose and Mario Gomez, Germany put their opponents on the back foot from the start on a bitterly cold evening.

With their former captain Michael Ballack watching from the stands for the first time since ending a long row with the coach, Joachim Löw, the hosts looked sharp with the midfielder Götze again deployed as a forward.

Yossi Benayoun Wants To Prove Himself At Arsenal