It has been reported that Germany coach Joachim Low is a big fan of Manchester United midfielder Darren Fletcher. 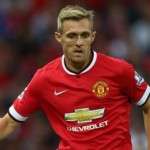 Fletcher is back to captain Scotland for the first time in almost two years after a battle with chronic bowel disease ulcerative colitis.

Low said: “We know all about their team and their biggest strength is that they are a team.

“They have good players like (Steven) Naismith, (Shaun) Maloney and (Ikechi) Anya.

“Darren Fletcher is the best known player playing for Manchester United. He is also the most experienced player.

“They will be motivated, physical and they will run a lot and they are also very good in one-on-one.

“They have won twice against Croatia and drew again USA and Nigeria and so we know they are a very good team.

“It will be a difficult match for us.”