Reports are out claiming that Germany coach Joachim Low has thanked Jurgen Klinsmann after lifting the World Cup. 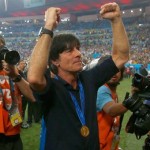 The 54 year old lifted the trophy in Rio de Janeiro after a 1-0 victory in extra time over Argentina, their first World Cup win since 1990.

“We started this project 10 years ago and what has happened today is the result of many years’ work, starting with Jurgen Klinsmann,” Low told FIFA.

“We’ve made constant progress, we believed in the project, we worked a lot and, if any group deserves it, it’s this team.

“We’ve always played good football and I believe that over this tournament, over seven matches, we’ve shown the best performances of any of the teams here in Brazil.

“The boys have also developed a team spirit which is unbelievable.”