It has been reported that Germany coach Joachim Low is delighted with the development of Chelsea winger Andre Schurrle. 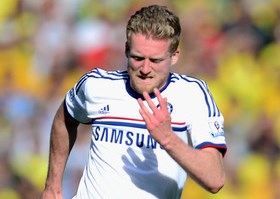 “I told him recently that last year I wasn’t very happy with his development, but now, in some games with us and in England, he has shown again what he can do,” said Low.

“He is dynamic, works back well and has a strong finish. His physical strength was also an issue, but he has worked hard on that.

“If he continues to play like that, the World Cup will certainly not pass him by.”