It has been reported that Germany coach Joachim Low has admitted that Arsenal winger Serge Gnabry is on his radar. 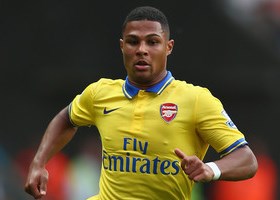 The 18 year old has so far only represented Germany at Under-19 level but has broken through into the Gunners first-team this season and has caught the attention of Low.

He said: “The boy is really good. He has exceptional qualities.

“I’m still open [to him making the World Cup squad]. We have an eye on him.”