It has been reported that Per Mertesacker is in a confident mood ahead of this weekend’s FIFA World Cup final. 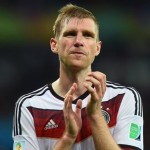 The Arsenal centre back has been a key performer for Germany who are preparing to take on Argentina in Rio de Janeiro on Sunday and he is feeling positive with the current die Mannschaft group which is the best he has seen.

“We have one of the strongest squads I’ve ever played in,” Mertesacker told reporters.

“We have two excellent players for every position and everyone believes in each other.

“We have created excellent team-spirit during the tournament and with those magnificent players growing up together it makes it easier.

“It started off in 2009 when we won the Under-21 European Championship and beat England 4-0. I think there’s a small link between these two tournaments.

“The 2009 tournament was a real turning point. The youth academies started developing well over the last five or six years.”