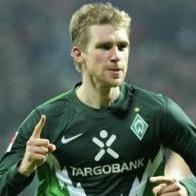 Reports have surfaced that Per Mertesacker is en route to London to undergo a medical at Arsenal.

The Gunners have been in talks with Werder Bremen over the signing of the German international centre back, who was given permission by club and country to jet out to England.

Arsenal are also understood to be close to concluding a deal for Brazil left-back Andre Santos as they sought to revamp their defence following Sunday’s humiliating 8-2 defeat at Manchester United.