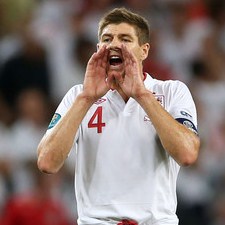 Spain has 10 players named in the 23-man team of the tournament, with England’s Steven Gerrard also included.