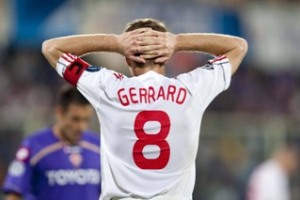 Liverpool captainr Steven Gerrard has told his team-mates that they must dig deep to salvage their faltering Premier League title bid.

Sunday’s 2-0 loss at Chelsea was the club’s third defeat of the campaign, one more than the whole of last season raising serious doubts about Liverpool’s title credentials.

Rafa Benitez’s men are six points adrift of leaders Chelsea with a trip to Sunderland and a visit from Manchester United next up in the league but club captain Steven Gerrard is adamant that his side are not prepared to throw the towel in just yet.

He told reporters that there is so much more to come from Liverpool and ‘a hell of a lot of football’ still left to play between now and May.

Gerrard also said that Liverpool are up for the challenges that lie ahead and that it will come down to who wants it the most and who is prepared to dig deepest.

Gerrard also said that when the manager demands a reaction from the players, he normally gets it.