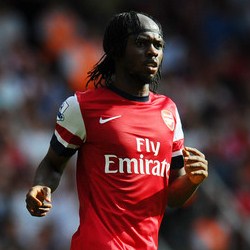 Arsenal attacker Gervinho has declared that he is hoping to imitate the career that Robert Pires had with the club.

The Ivory Coast international star was impressive in patches, but far too inconsistent, in his debut Gunners campaign last term and now he knows he needs to up the ante much the same as Pires did with his Footballer of the Year award in his second season in North London in 2002.

Gervinho told Arsenal Player : “You should always look at these examples from the past,”.

“Robert is a fantastic player, very experienced, and I saw this for myself [when Pires was] training here.

“I really hope to emulate Robert Pires in my second season, hopefully do even better, but I hope to carve out my own niche of course.

“I hope to push on personally, also to progress with the team and to showcase my qualities. I’ve learnt lots of things, coming to a new club, being new to the Premier League. I’ve learnt to adapt on the pitch and, when I think back, also in front of goal.

“I really feel that I’ve come on a lot, I feel really good in training and I’m ready for my second season.”