It has been reported that AS Roma star Gervinho has launched a furious attack on Ivory Coast World Cup coach Sabri Lamouchi. 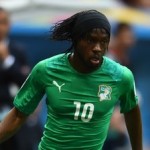 The former Arsenal winger told La Gazzetta dello Sport : “The fault of the elimination is no doubt ours, but the players weren’t the only ones who got it wrong,”.

“Certain games have to be faced without fear and that is what the Coach and his staff need to focus on.

“They need to have the experience of this type of match, to tell us what to do. We were unable to make the most of the fact our destiny was in our hands.”