AS Roma attacker Gervinho insists that the Ivory Coast national team has to move on following the retirement of Didier Drogba. 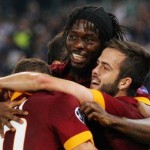 The 36-year old Chelsea striker called time on his national team career after the 2014 World Cup having scored a record 65 goals in his 104 appearances for Les Elephants.

Drogba was so often the catalyst for the success of the Ivorian side but former Arsenal star Gervinho is calling on the current crop to take over from where the power forward left off.

“Drogba was my captain and he immensely helped the Ivorian national team to get to places, and I can say he cannot be replaced for now. I’m happy and proud to have played alongside him,” Gervinho told FIFA’s official website.

“However, we need to turn the page to move forward and overcome future challenges.

“We now have a new coach [Herve Renard] and we are competing in the 2015 Africa Cup of Nations qualifiers. We have to adapt to the new situation and help ourselves book a place at the 2015 Afcon.”

Juan Mata : We Will Work Hard With Rafa Benitez