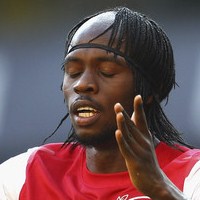 Gervinho has declared that it is essential for captain Robin van Persie to stay with the club.

The Dutchman, already with seven goals from eight starts this season, has not opened talks regarding a new contract with the North London club and with his current deal expiring in less than two years, the Gunners are hoping to soon get something sorted.

Although his immediate future is not in danger, van Persie is sure to emerge as a target for bigger clubs in Europe but Gervinho feels he needs to remain at the Emirates and continue leading from the front for Arsenal.

“We always need our best players so a player like Robin, frankly, we need him to stay at the club,” said the former Lille man.

“It would give me pleasure if he stayed. I have just arrived and I would like him to stay so I can play with him a while longer.

“This is a personal thing between Robin, the coach and the directors. Each of us takes care of his own career and the most important thing in the dressing room is to talk about the team.

“Psychologically, Robin is good for us. He is among the most experienced players on the pitch and when he comes on, he puts the opposition’s defence under pressure and that helps our game.

“Against Stoke, he came on and scored two goals. He is an excellent player and the team needs him. Arsenal, Chelsea To Do Battle For Napoli Striker Gonzalo Higuain