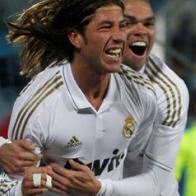 The game took place in fierce wind, and despite the high quality of the Real line-up, free-flowing football was rare.

Ramos’s 18th-minute goal separated the sides, and though Getafe were only ever a moment of inspiration away from victory, they scarcely threatened.

That said, they were unlucky that a Pepe handball from Diego Castro’s long-range shot was not spotted late on to give them a chance of equalising from the penalty spot.

Real went into the game knowing that victory would give them, at least briefly, a 10-point lead over Barcelona at the top of La Liga.