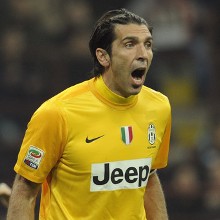 Juventus goalkeeper Gianluigi Buffon insists that he has plenty of years ahead of him.

The Italian international looks ahead to “at least another three years at the top”.

The Juventus star told Sport Mediaset : “I am 34 and for a goalkeeper I don’t consider myself old. I am mature,”.

“I know where I can push myself and I think I have at least another three years at the top level.

“This year has been very satisfying both on the field and off, so 2012 will be remembered for a long time. After two consecutive seventh-place finishes, we even surprised ourselves by doing something memorable.

“It was all down to hard work, sweat and the fortune of being led by a great Coach.

“As for Italy, nobody expected us to reach the Euro 2012 Final. It’s true, getting there isn’t the same as winning, but at the starting gate I dare anyone to say we were among the favourites to reach the Final.”