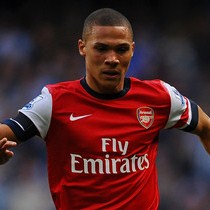 Kieran Gibbs insists Sunday’s FA Cup third round tie at Swansea will be ‘one of the biggest games of our season’, stressing the significance of ending the chase of silverware that has haunted boss Arsene Wenger with increasing menace in recent years.

“Obviously we’re out of the League Cup now so we need to make sure that we’re fully focused on Sunday and realise that we have a chance to put a trophy in the cabinet,” Gibbs told the Arsenal website. “We go to Swansea like it’s one of our biggest games of the season.”

Gibbs also expressed his delight his individual progress this season, with his improved fitness record and renewed contract giving him plenty to smile for 2013.

“I’ve always been committed to the club ever since I was given my chance by the boss,” he said. “I wanted to show him how dedicated I am. I hope that over the last few months I’ve done that.

“I’m happy with the first half of the season. I’ve been able to get in a good number of games and this is the closest I’ve had to a full season. Hopefully I can keep that going for the rest of the season and keep myself fit and strong.

“It’s been important to get some momentum. It’s what I’ve wanted to do for so long now and I’m happy just to be fit, playing and getting games.”