Former Bayern Munich striker Giovane Elber has declared that the club must not sell Thomas Muller. 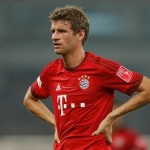 Elber is hoping Bayern can convince the striker to stay.

He told BILD: “If somebody now comes up with the idea to sell him, you might as well give up.

“I won’t watch games here at the stadium any longer.

“Müller is a like Bastian Schweinsteiger, but younger. He is the face of the club.”