Reports are out claiming that Olivier Giroud is sorry Arsenal failed to sign Real Madrid striker Karim Benzema this summer. 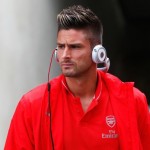 Despite the club’s interest in Benzema, Real Madrid boss Rafa Benitez is insistent that the 27-year-old striker will not be sold in this window.

Giroud said: “It is true that every year here there is speculation about a new striker signing.

“There were seasons when we signed [Alexis] Sanchez and [Danny] Welbeck, others when we were talking about [Luis] Suarez.

“It is obvious that in a club, a team, where a lot is expected, we need several good attackers and I understand that the fans want that we spend more money.

“It is not up to me to answer this question, the coach knows very well what he is doing, and sometimes you should not buy just to buy, and sometimes there are not players out there that you need, who are available.

“We have a very good squad, with quality, and I am sure that with this squad we can go very far.

“Aside from that, it would have been good if Karim had signed too, eh?”