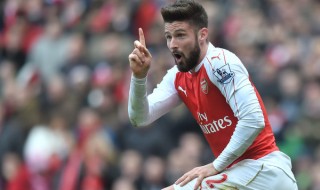 The football season may be over but this is the time for transfers and contract talks and according to the DailyCannon Olivier Giroud and his representatives are reportedly aiming to meet with Arsenal next week in order to hold talks with the club over the striker’s future.

This doesn’t come as a surprise , what better way to negotiate a new deal than when your competitor for the striker role Danny Welbeck is out for 9 months, practically forcing the hand of the club to begin talks.

According to L’Equipe, Arsenal is happy with the Frenchman and are confident going forward. However, the meeting itself suggests that perhaps the striker’s representatives are the unsettled ones.

When Danny Welbeck returned to health he was almost immediately preferred to Giroud, and now that Welbeck will be out most of next season with knee injury rumors have suggested Arsenal will be looking to buy a new striker in the market. The Frenchman will turn 30 shortly after next season begins, and with the twilight of his career firm in his sight it makes sense why he wants to know what his current status is at Arsenal.