Napoli striker Gonzalo Higuain has revealed that he never heard from Arsenal in the summer. 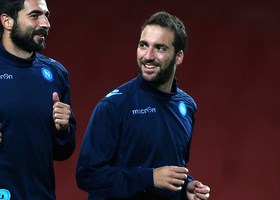 The former Real Madrid star was a target for the Gunners before signing for Napoli.

When asked if a switch to Arsenal was close, the Argentine international told The Times: “Yes – but I did not speak to them.

“They [Real Madrid] said Arsenal wanted to sign me, that they were there negotiating but it was Napoli who came and bought me.

“Knowing how much I was wanted gave me a lot of confidence.

“The manager spoke very well to me too. He is one of the reasons that convinced me to come.

“He is a sincere person, an honest person. The things he said have to remain between us, but he made it a very easy decision.”