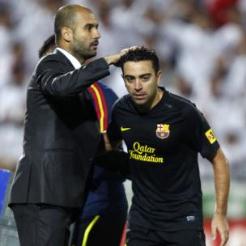 Champions Barcelona returned to winning ways in the Primera Division but had to grind out the three points in a 1-0 win against nine-man Granada.

Although it was a less than emphatic success, Barca they did get the job done against their struggling hosts as captain Xavi’s first-half free-kick was just about enough to earn them the victory.

It was a tough night for Pep Guardiola’s side, however, and could have been even harder had Granada not lost striker Jaime Romero in the 53rd minute and Daniel Benitez in added time.

Guardiola handed 20-year-old winger Isaac Cuenca his full debut following a brief cameo in last week’s Champions League win at home to Viktoria Plzen, despite having the likes of David Villa and Andres Iniesta available, with the duo among the substitutes.