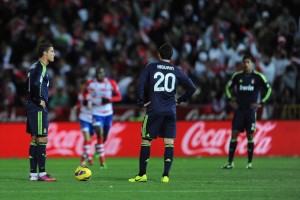 Cristiano Ronaldo scored the first own goal of his career to send Real Madrid to a shock 1-0 defeat at Granada in La Liga on Saturday, further damaging their already slim hopes of retaining the La Liga title.

Ronaldo has scored 21 league goals this season but headed into his own net at a corner in the 22nd minute. Real rarely threatened in the face of resolute opposition. The result left the champions 15 points adrift of leaders Barcelona, who can extend their advantage over their great rivals to 18 with a win at Valencia on Sunday.