Reports are out claiming that Arsenal face a battle to convince Reims midfielder Grzegorz Krychowiak about a move to London. 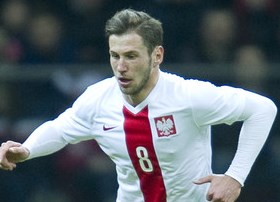 It is said that Gunners’ French scout Gilles Grimandi has been keeping tabs on the Poland international since the closure of the January market.

However, Krychowiak concedes he fancies a move to the Bundesliga.

“I dream of the German Championship,” said the 24 year-old. Liverpool vs Arsenal – Past Stats