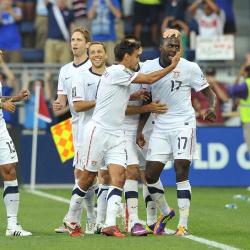 The United States moved into the quarter-finals of the CONCACAF Gold Cup, where they will face Jamaica, after a 1-0 win over Guadeloupe on Tuesday.

The result meant Canada, who drew 1-1 with Group C winners Panama, are eliminated from the tournament after being moments away from securing passage to the last eight before Panama’s Luis Tejada equalised.

The U.S needed a win or a draw against Caribbean side Guadeloupe, who are not a full member of FIFA due to their status as a ‘department’ of France.

After a poor start in their defeat to Panama on Saturday, Bob Bradley’s U.S. team came out strongly and took the lead with a ninth minute blast from 25 yards out by striker Jozy Altidore.

The U.S wasted at least half a dozen clear chances to extend their advantage with Clint Dempsey the prime culprit.

But at least the Americans are into the last eight, unlike their northern neighbours who went out in agonising fashion.