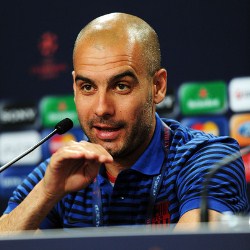 Pep Guardiola has demanded that Barcelona must play far better than in 2009 to claim another Champions League final win over Manchester United.

Barcelona defeated the Premier League champions two years ago in Rome they triumphed 2-0. Samuel Eto’o and Lionel Messi were the goalscorers on that day.

Guardiola said : “We need to play much better than we did in 2009 and this is one of the things I’ve told my players repeatedly in the last few days,”.

“United were better in defence and attack and we need to be much quicker. Everything was new to us really and there was a lot of chaos and confusion. We know each other a lot better now and if we play like that again we won’t win.”

Although both sides missed out on the Champions League showpiece last season, United are in their third final in four seasons while it is a third in six for the Spaniards and the teams go into the game having won their domestic leagues.