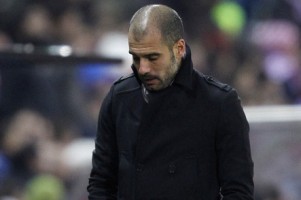 The ongoing travel chaos affecting European air travel meant the Catalan giants had to take the bus to Giuseppe Meazza.

Guardiola told reporters that : “I don’t want to make excuses,”.

“It was a long trip, that is true, but this is the semi-finals of the Champions League and the desire to reach the final should be important enough.

“It’s okay, though, this happens.”

Barca broke the deadlock through Pedro, but the hosts hit back in style as Wesley Sneijder, Maicon and Diego Milito all found the target.

“We started with a goal but we didn’t play enough football in the first half,” said Guardiola.

“We didn’t move the ball with passion. We played against a good team under difficult circumstances, but there is one game left and we are going to try.” Juventus Not Interested In Selling Paul Pogba To Barcelona, Chelsea