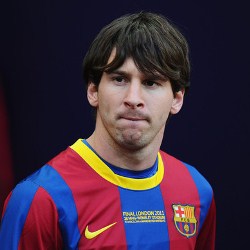 Pep Guardiola was thrilled with the performance of Lionel Messi in victory over Manchester United in last night’s Champions League final.

The former player and now manager singled out the Argentine superstar for special praise.

He said: “Lionel is the best player I’ve ever seen, probably the best ever. He made the difference. Messi is unique, a one-off. I just hope he doesn’t get fed up. When he doesn’t play well it is because something is wrong with his environment. Let’s hope he can continue playing well.”

Guardiola however, was unsure whether Barcelona were the best club team of all time.

“It is impossible to say. I didn’t see the Real Madrid of Di Stefano and the Ajax of Cruyff. We try to play as well as possible. I hope in the next 10 or 15 years the people will remember them and have enjoyed them.”