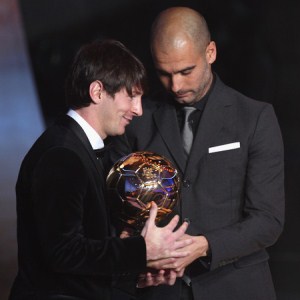 Interesting news are out and it has been revealed that Barcelona coach Pep Guardiola has questioned Lionel Messi being awarded the FIFA Ballon d’Or.

Asked if it was unfair, Guardiola replied: “Maybe. Here they have voted for him and that’s how it was decided. I still think Leo is the best, and they decided it that way. There is no getting around it.

“If Spain are world champions, can that be better represented by more than half the best team in the 2010? Messi was still influential and helps us and gives us the league that is the best in the world.”