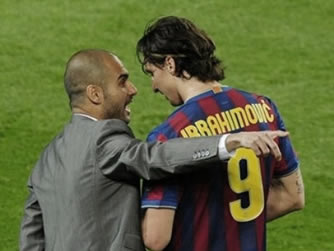 Interesting news are out and it has been reported that Barcelona coach Pep Guardiola has attempted to take the sting out of his row with Zlatan Ibrahimovic.

The new AC Milan signing himself has hit out at Guardiola, claiming the two had not spoken in months and pejoratively dubbing his former coach “the philosopher.”

“I wish I was a philosopher, although by the tone in which he said it I know he didn’t mean it (as a compliment),” the Barca coach said at a press conference.

Nevertheless, Guardiola claims he is happy with the Swede’s contribution in his time at the club.

“I am grateful for his hard work and his help in winning the five titles (Primera Division, World Club Cup, back-to-back Supercopas and the European Super Cup) – I don’t know if we would have done it without him,” he said.

“I understand, by what he has been saying and what his official spokesperson has said, that they were not happy working with me,” he added.

“But I was happy with them and I learnt a lot from him.”

Despite the prickly nature of the Swede’s departure and the barbed criticism he has been forced to endure from his former player, Guardiola wishes the striker well in Milan.

“I hope he finds his place at Milan. I hope he can win the league and get to the semi-finals of the Champions League for the second time,” he said.