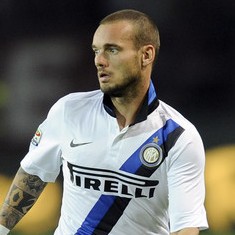 Wesley Sneijder is pining for a last-minute switch to England and has asked his advisers to make one final attempt to plot a move to a top Premier League club.

Despite being on the brink of a transfer to Galatasaray, the Inter Milan midfielder has made it clear to his agent that his preference remains a move to the English game.

Sneijder’s representatives have been in talks with Arsenal, Manchester United, Manchester City and Chelsea but they all turned down the player because of his high wage demands.

He currently earns nearly £9million a year at the San Siro and has always refused to take a significant pay cut. But if a last-minute move to England can be resurrected, it would require the unsettled Holland star to finally lower his wage demands.

On Wednesday Inter Milan president Massimo Moratti confirmed an offer from Galatasaray has been accepted,but the player hopes to end up in England.