It has been reported that Sunderland boss Gus Poyet included Anthony Reveillere in his squad for defeat to Arsenal. 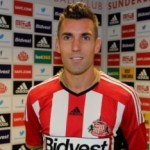 The French defender, 34, signed for Sunderland on Thursday.

However he failed to get off the bench for the 2-0 home defeat.

Alexis Sanchez made the most of horrendous errors by defender Wes Brown and goalkeeper Vito Mannone either side of half-time to secure a 2-0 victory for the Gunners at the Stadium of Light.