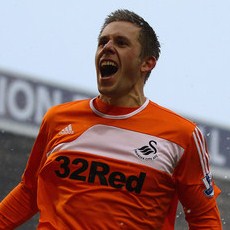 Gylfi Sigurdsson is determined to achieve success with Tottenham after finalising his move to the club.

The Icelandic international has joined Spurs despite interest from Liverpool and Swansea City and he is now looking to win titles in North London.

“I’m delighted to be here,” he told the club’s official website.

“This club is always improving. There is massive ambition from the board and the players are really ambitious as well. We’re all looking forward for the new season to begin.”

“The main target at Swansea (when I was on loan) was to stay in the league, here at Spurs, it’s a big club and we aim to win titles and silverware,” he added.

“I think the most important thing is that we get off to a good start in the Premier League, get a good momentum and then we can take that into the Europa League and then the FA Cup.

“We want to play for silverware in every competition we are in.”