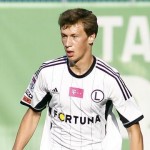 The Legia Warsaw midfielder is a top target for the Gunners, though was in Germany over the weekend to visit HSV.

Zinnbauer rates the 16 year-old, though admits Arsenal remain favourites for his signature.

“A really good guy with a good character. And if we had no chance, he would hardly have accepted our invitation to look over Hamburg,” said Zinnbauer.

“It is the question of whether he would go to Arsenal. But for us, he fits perfectly.”