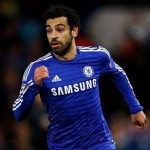 It has been reported that Hamburg SV have made a move for Chelsea winger Mohamed Salah.

The Daily Mail reported that Salah is wanted on loan by Bundesliga side Hamburg but the Egyptian is holding out for a better move.

It is understood he has also been offered to Fiorentina, who want to send back Marko Marin and are trying to offload big-earner Mario Gomez in the process, but the Italians have other priorities.

Marin is wanted on loan at Wolfsburg, who could look to make the move permanent.