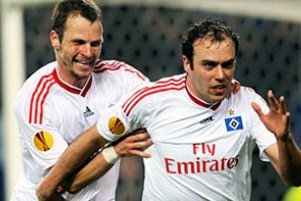 Defender Joris Mathijsen gave Hamburg the lead in the 23rd minute with his first goal in the competition and Ruud van Nistelrooy tallied his first European goal for Hamburg in the 40th minute to make it 2-0.

Jonathan Legear struck for the sixth time in the Europa League to trim the margin to 2-1 in the 45th minute but David Jarolim, back from suspension, also scored his first in the competition to give his side a 3-1 cushion after 76 minutes.