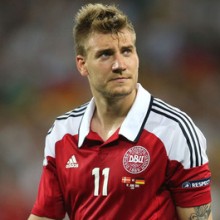 Arsenal could finally be shot of troublesome striker Nicklas Bendtner in the summer, with Hamburg keen on his signature.

The Bundesliga side are set to move for Bendtner at the end of the season, when the 25-year-old’s disappointing loan spell at Juventus comes to an end.

Hamburg had attempted to land Bendtner last summer, but the striker opted to move to Turin instead. But the loan move has not panned out well, with the Danish international having yet to score for the Serie A side.

Bendtner, who joined Arsenal as a youth player in 2004 from Kjobenhavns Boldklub in Denmark, has never really settled in north London and has been shipped out on loan to Birmingham, Sunderland and Juventus during his nine years with the Gunners, in an attempt to find form.

But the striker’s off-field actions have been as much a cause for concern for Arsene Wenger as his wayward form in front of goal.


Lukas Podolski set to leave Arsenal in the summer