Reports are out claiming that Barcelona midfielder Alen Halilovic remains on the market. 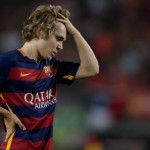 It is said that Hamburg SV have pulled out of talks over a loan deal for the young Croatian.

AS claims that Hamburg stated that they could not meet the appearance clause of 60 percent of available minutes throughout the season that Barcelona had asked be inserted into any deal for the promising 19-year-old.

West Ham United and Everton have also been linked with Halilovic.