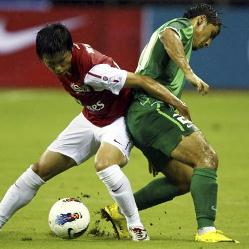 Arsenal gave Arsene Wenger plenty to ponder after their Asian tour concluded with a disappointing 1-1 draw against Hangzhou Greentown in Yiwu City.

The Gunners were desperately poor at the back in the first half and fell behind to a goal from Sebastian Vazquez after 16 minutes following a mistake from goalkeeper Vito Mannone.

Carlos Vela continued his impressive pre-season campaign when drawing Arsenal level on the stroke of half-time with a finish from close range, and though the Gunners improved markedly after their manager made 11 changes at the break, they were unable to find a winner in China.